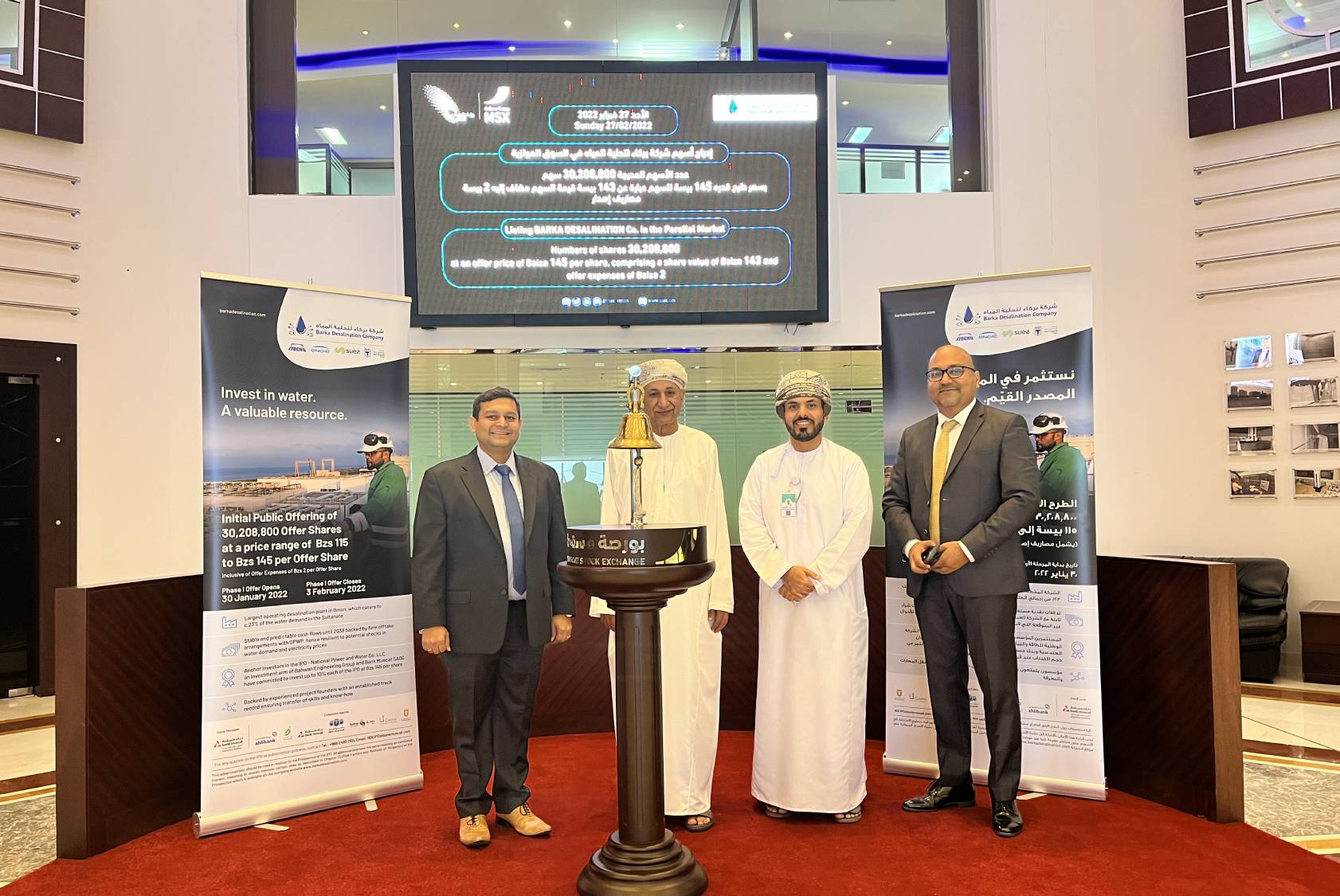 Barka Desalination Company (BDC) has announced the successful close of Phase I of its IPO for listing on the Muscat Stock Exchange (MSX). Based on the price discovery process completed through book building by large and institutional investors, the allotment price for shares has been determined at Bzs 145 at the highest end of the price range of Bzs 115 to Bzs 145 per share.

Phase I of the IPO, being managed by Bank Muscat, received a strong response with an oversubscription of 4.83 times of Phase I offer shares. The investors included a cross-section of Oman’s leading corporates, banks, insurance companies, asset management companies, sovereign entities, pension funds,  as well as high net worth individuals. As anchor investors to the IPO, each of National Power and Water Co. LLC, (an investment arm of Bahwan Engineering Group), and Bank Muscat SAOG had provided commitments to invest up to 10% of the IPO at Bzs 145 per share i.e. the highest end of the price range. A high number of bids submitted by investors also came at the 145 baizas, the top end of the price range. The interest from institutional and large investors demonstrates the strong interest in this offering from the investor community in Oman as an attractive offering.

As per the Company’s prospectus, IPO investors are expected to receive the first dividend of 6 Bzs in the month of April 2022. Further, as per the Prospectus, BDC is expected to declare semi-annual dividends of 6 Bzs per share in April and October every year. (Refer to the Prospectus for more details). As per the prospectus, IPO investors could expect a stable annual dividend yield of 8.4% on issue price of 145 baizas (excluding the 2 Bzs issue expenses) paid through two dividend payments each year.

The Phase II of the IPO, where shares would be offered to retail investors at the price of Bzs 145, would open for subscription from 8 February 2022 to 14 February 2022. Earlier, the IPO received positive coverage from the leading brokerages in Oman including Ubhar Capital and United Securities with a recommendation to ‘Subscribe’ to the IPO.

Commenting on the success of Phase I, Patrick Thienpont, CEO of BDC said, “We are extremely pleased with the success of Phase I of the IPO, which is a positive indication of the confidence in the industry and market in BDC. I would like to take this opportunity to thank all investors who have made Phase I process a success. Wide and strong participation in the Phase I of the IPO is in line with our expectations and endorses the response we received during our investor meetings. Retail investors now have the advantage to see the strong response from the large investors and can now apply to become part of the success story of Barka Desalination and earn average dividend yield of 8.4% p.a. (excluding the 2 Bzs issue expenses) and get the first dividend in month of April 2022”. (Refer to the prospectus for the IPO for further details including the projected dividends and risk factors).”